Miles Davis.....Birth of the Cool 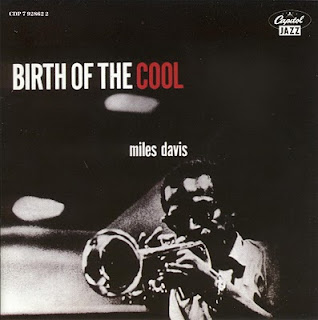 Birth of the Cool is the first important leader date from Miles Davis, one of jazz's most seminal figures and farsighted practitioners. Having made his reputation in large measure from playing with bop giant Charlie Parker, Davis confounded expectations when he embraced the "cool" arranging style of Gil Evans, an arranger for Claude Thornhill's band. Evans, who was employing unique voicings by adding French horns and tuba to Thornhill's instrumentations, also emphasized a diminished use of vibrato in both reeds and brass, producing a drier, "cool" sound. Two of Evans's arrangements, "Boplicity" and "Moon Dreams," appear on the album. Also involved are baritone saxophonist Gerry Mulligan, who contributed such outstanding tunes as "Jeru" and "Venus de Milo," and Modern Jazz Quartet pianist John Lewis. The result is a date that has withstood the tests of time, fashion, and Davis's own extraordinary growth as a performer. An enhanced set, The Complete Birth of the Cool expands the original issue with previously bootlegged live recordings of Davis's nonet at the Royal Roost in New York in 1948. Although the sound quality is far from perfect, the performances are remarkable, and worth the additional expense for the serious fan. --Fred Goodman..Amazon.com 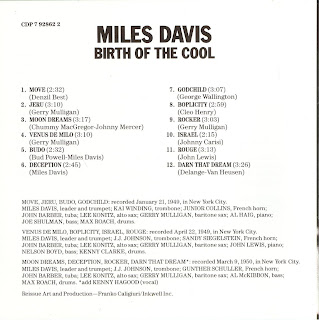 The Complete Birth of the Cool 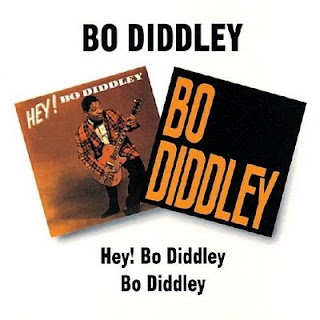 Bo Diddley (December 30, 1928 – June 2, 2008), born Ellas Otha Bates, was an original and influential American rock ‘n roll singer, guitarist, and songwriter. He was known as “The Originator” because of his key role in the transition from blues music to rock ‘n roll, influencing a host of legendary acts including Buddy Holly, Jimi Hendrix and Eric Clapton.

There are any number of excellent Bo Diddley compilations that cherry pick the man's work and if you merely are after a concise overview, several do the job perfectly. This 24 track release from 1995 would seem to be an excellent starting point as it comprises complete reissues of two albums from 1962 and 1963 and furthermore has a strong sprinkling of those very titles that reappear on so many collections. The first 12 tracks comprise the album Hey! Bo Diddley, released in the UK on Pye International in April 1963, and the second 12 made up the album Bo Diddley which followed 5 months later. 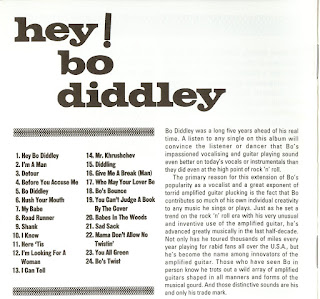