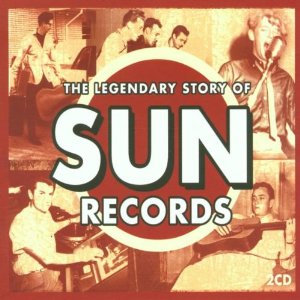 Sun Records is a record label founded in Memphis, Tennessee, starting operations on March 27, 1952.
Founded by Sam Phillips, Sun Records was notable for discovering and first recording such influential musicians as Elvis Presley, Carl Perkins, Roy Orbison, Jerry Lee Lewis and Johnny Cash. (Presley's recording contract was sold to RCA Victor Records for $35,000 in 1955 to relieve financial difficulties which Sun was going through.) Prior to those records, Sun Records had concentrated on recording African-American musicians, because Phillips loved Rhythm and Blues and wanted to bring black music to a white audience. It was Sun record producer and engineer, Jack Clement, who discovered and recorded Jerry Lee Lewis, while owner Sam Phillips was away on a trip to Florida. The original Sun Records logo was designed by John Gale Parker, Jr., a resident of Memphis and high school classmate of Phillips.

The music of many Sun Records musicians helped lay part of the foundation of late 20th century rock and roll, plus it influenced many younger musicians, particularly The Beatles. In 2001, Paul McCartney appeared on a tribute compilation album titled Good Rockin' Tonight: The Legacy Of Sun Records. The 2010 tribute Million Dollar Quartet is based on the famous photograph of Carl Perkins, Johnny Cash and Jerry Lee Lewis grouped round Elvis Presley at the piano, the night when the four joined in an impromptu jam at Sun Record's one-room sound studio, the "Million Dollar Quartet" of 4 December 1956.

In 1969, Mercury Records label producer Shelby Singleton purchased the Sun label from Phillips. Singleton merged his operations into Sun International Corporation, which re-released and re-packaged compilations of Sun's early artists in the early 1970s. It would later introduce rockabilly tribute singer Jimmy "Orion" Ellis in 1980 as Orion taking on the persona of Elvis Presley. The company remains in business today as Sun Entertainment Corporation, which currently licenses its brand and classic hit recordings (many of which have appeared in CD boxed sets and other compilations) to independent reissue labels. Sun Entertainment also includes SSS International Records, Plantation Records, Amazon Records, Red Bird Records, Blue Cat Records among other labels the company acquired over the years. Its website sells collectible items as well as compact discs bearing the original 1950s Sun logo.

Some of the notable recording artists at Sun were Roscoe Gordon, Rufus Thomas, who recorded solo and with his daughter Carla Thomas, Little Milton, Jerry Lee Lewis, Carl Perkins, Johnny Cash, Elvis Presley, Roy Orbison, Charlie Rich and Conway Twitty (who at that time recorded under his real name of Harold Jenkins).

This excellent 60 track compilation represents all the styles of music heralded by Sun Records, from earthy Blues and Country to Rockabilly and Rock'n' Roll. For anyone interested in the roots of rock and roll, this an important and historical collection. Many of these tracks were later covered by other artists early in their own careers.