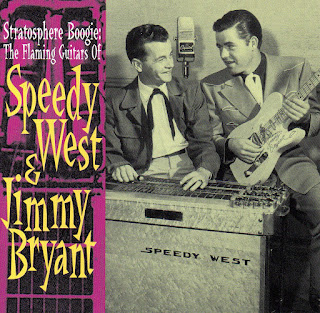 Pedal steel-er West and guitarist Bryant were the most in-demand session musicians of the 50's. On their own, though, is when they really let loose; and this 16-track collection culling the best of their Capitol instrumentals contains country, jazz, bluegrass and space-age effects that musicians are still scratching their heads over 40 years later!


These 16 sides were selected from the more than 50 that guitarist Bryant and pedal steel player West cut in Los Angeles between 1951 and 1956, when they were also most in demand as country--and occasionally pop--session men. Forty years later, these are still considered the hottest, most fully realized, most musical instrumentals in the history of country. West's slashing, muscular steel lines send out sparks, while Bryant's bop-influenced, breakneck guitar cuts clean as a scalpel. Using the guitar-steel pairings of Western swing as a jumping-off point, these guys created a jazzy body of work that many guitarists are still trying to decipher. 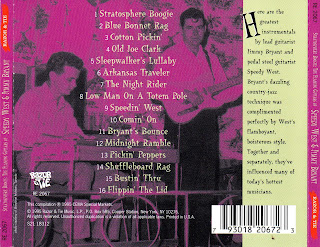