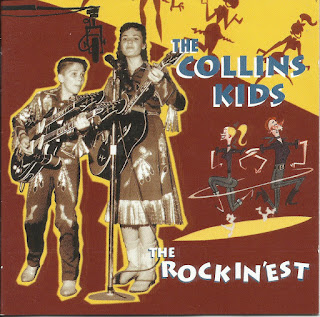 The Collins Kids are an American rockabilly duo featuring Lawrencine "Lorrie" Collins (born May 7, 1942) and her younger brother Lawrence "Larry" Collins (born October 4, 1944). Their hits in the 1950's as youngsters, such as "Hop, Skip and Jump", "Beetle Bug Bop" and "Hoy Hoy", were geared towards children, but their infectious singing and playing crossed over generations. Larry, a lightning-fingered guitar whiz at age 10, was known for playing a double-neck Mosrite guitar like his mentor, Joe Maphis.

They became regular performers on Town Hall Party in 1954 and on the syndicated for television version of the show, Tex Ritter's Ranch Party, which ran from 1957 to 1959. It was on Town Hall Party that Ricky Nelson first saw Lorrie Collins, soon after making her the first steady girlfriend of that 1950's teen heartthrob.

The Collins continued to perform together in the mid-1960's, appearing as regulars on the Canadian music program Star Route and making a guest appearance on the September 8, 1965 edition of Shindig!.

Larry wrote a number of well-known songs including "Delta Dawn", "You're the Reason God Made Oklahoma", "Tulsa Turnaround"; some in partnership with songwriter Alexander Harvey (not to be confused with Scottish rocker Alex Harvey).

The duo reunited for a rockabilly revival concert in England in 1993 and continue to perform. They appeared at Deke Dickerson's Guitar Geek Festival in Anaheim, California on January 19, 2008, with a new addition to the band: their nephew, Dakota Serge, playing upright bass. 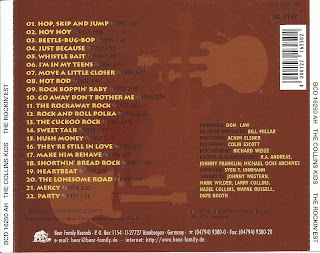 Posted by Marty at Thursday, February 25, 2016 No comments: Links to this post 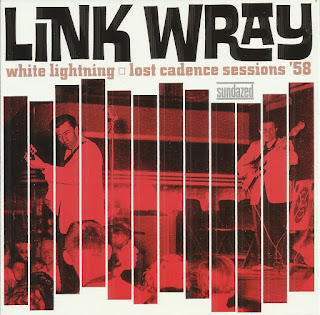 Building on the distorted electric guitar sound of early records, his 1958 instrumental hit "Rumble" by Link Wray and his Ray Men popularized "the power chord, the major modus operandi of modern rock guitarists", making possible "punk and heavy rock". Rolling Stone placed Wray at No. 45 of the 100 greatest guitarists of all time. In 2013 he was announced as a nominee for the Rock and Roll Hall of Fame. His musical style primarily consisted of rock and roll, rockabilly and country.

The kids of 1958 loved the Ray Men, and their first single for Cadence Records shot up the charts like a label owner's dream. This is the fantastic and fiery album that was supposed to have been released as a follow-up to one of the all-time great instrumental classics, the ultra-menacing "Rumble." But faster than you can say "Drag Race," everyone--Cadence label-owner Archie Bleyer included--was talking about this new threat to the morals of American youth. That's why Link and his boys were off the imprint, and this album of prime distorto-guitar-crunch cool remained unreleased for nearly 50 years. Well here it is, and it's every bit as dirty and dangerous as you would expect! 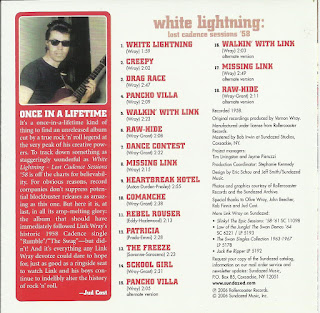 Reviews:
"This rocks forwards and backwards. That it took so long to be released is borderline criminal. It's refreshing to hear the power chord from a new-old view."

"Raucous instrumental twangy guitar rock! As raw and tough as the 50's has to offer. This stuff will blow your mind!"


Posted by Marty at Monday, February 15, 2016 No comments: Links to this post