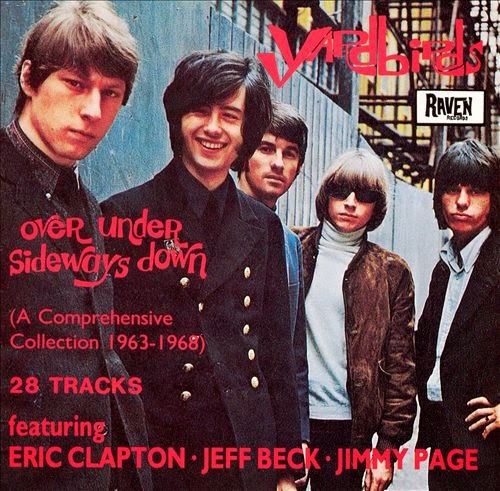 Raven's 1990 release Over Under Sideways Down 1963-1968 stood as the best single-disc overview of the Yardbirds' career until Raven revamped the title as Happenings Ten Years Time Ago 1964-1968 18 years later. Compared to that latter-day comp, Over Under Sideways Down has a slightly stronger blues bent, opening with the Sonny Boy Williamson cover "Baby What's Wrong" and featuring Slim Harpo's "Got Love If You Want It," taken from Five Live Yardbirds, but that's only slight; the other substitution is "Ten Little Indians" for "White Summer," which showcases Jimmy Page's guitar ever so slightly more. Apart from that and a good remastering, the discs are pretty much the same, offering all the same songs, including hits from all phases of the group, which is a rarity among Yardbirds comps. If Happenings Ten Years Time Ago can't be found, Over Under Sideways Down is a good substitution, as it was indeed the best Yardbirds single-disc for years and it's still a cracker of a listen -- but it's not worth seeking out since Happenings is easily available, as is Rhino's superb double-disc Ultimate!

Over Under Sideways Down

Thank you for this. I have every Yardbirds album, bootleg live performance and whatever I can get my hands on. I never saw this one but; when I saw it was remastered, I knew I had to have it. "Happenings Ten Years Time Ago" is my favorite song by them. I remember when I first heard it on the radio and ran out to buy it. I had never heard anything like it in my life, even though I had other singles by them. To me , it was a game changer, and signified that there was hope for Rock music instead of being stuck forever in Top 40!
Jeff Beck is my all - time favorite guitarist and I believe the greatest electric guitarist in the world! Thanks again!