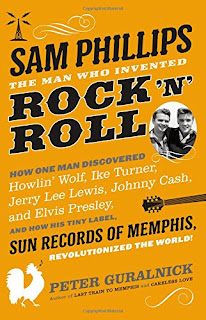 Peter Guralnick, the author of the critically acclaimed Elvis Presley biography Last Train to Memphis, brings us the life of Sam Phillips, the visionary genius who single-handedly steered the revolutionary path of Sun Records.

The music that he shaped in his tiny Memphis studio with artists as diverse as Elvis Presley, Ike Turner, Howlin' Wolf, Jerry Lee Lewis, and Johnny Cash, introduced a sound that had never been heard before. He brought forth a singular mix of black and white voices passionately proclaiming the vitality of the American vernacular tradition while at the same time declaring, once and for all, a new, integrated musical day. With extensive interviews and firsthand personal observations extending over a 25-year period with Phillips, along with wide-ranging interviews with nearly all the legendary Sun Records artists, Guralnick gives us an ardent, unrestrained portrait of an American original as compelling in his own right as Mark Twain, Walt Whitman, or Thomas Edison. 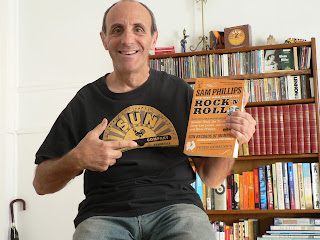 Marty's review: Probably the most fascinating and informative book on the history of Sam Phillips and Sun Records I have ever read. It is also a music encyclopedia on the birth of rock and roll and all that it spawned after it. The just released paperback edition is a generous 763 pages worth, including dozens of photographs, that will have the most ardent music aficionado drooling over its pages and devouring every tasty morsel of juicy facts, historical events and biographical detail. If you thought you knew all about Sam Phillips, Sun Records and the beginnings of Elvis Presley's rise to fame, then this book will surprise and delight and have you digging out your music collections and wanting to hear more of the artists mentioned hear and appreciate their roots and the music they made. 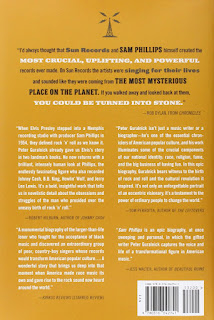 Peter Guralnick has written extensively on American music and musicians. His books include the prize-winning Elvis Presley two-part biography Last Train to Memphis and Careless Love; an acclaimed trilogy on American roots music, Sweet Soul Music, Lost Highway and Feel Like Going Home; the biographical inquiry Searching for Robert Johnson; the novel Nighthawk Blues; and Dream Boogie, a biography of Sam Cooke. He splits his time between Nashville and Massachusetts.

Published by Little Brown and Company

Posted by Marty at Wednesday, November 16, 2016 No comments:

The Guitar Sounds of James Burton....Guitarist for Elvis Presley, Ricky Nelson and many others 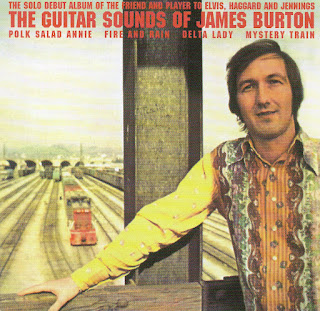 Produced by former Elvis producer Felton Jarvis, THE GUITAR SOUNDS OF JAMES BURTON is a must for fans of great-sounding guitar. He sizzles in places, and backs off in others. Most people know James' resume, having played guitar for so many great artists, especially Elvis. But he is a great artist in his own right. He is a pleasure to watch live, continually proving that you don't need to jump up and down and smash your guitar to get attention. James Burton epitomizes the word "cool."

Originally released in 1971, the album was recorded when Elvis was booked into a Nashville studio but was ill and thus unable to record. Felton Jarvis suggested they use the time to make the solo LP that James had been discussing with him. This album has twelve tracks, many of which are instantly recognizable classics ("Hound Dog," "Mystery Train," "Suzie Q" and "Johnny B. Goode"), but there are tracks on this disc which James wrote himself, "Rock and Raunch" and "Long Reach," which, not surprisingly, play to James' strengths as a picker. 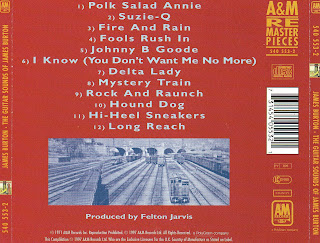