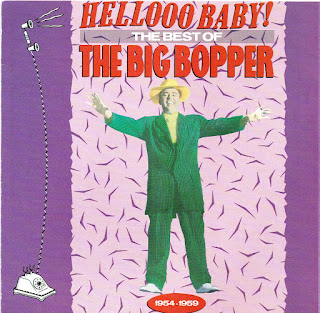 Jiles Perry "J. P." Richardson Jr. (October 24, 1930 – February 3, 1959), known as The Big Bopper, was an American musician, singer, songwriter, and disc jockey. His best known compositions include "Chantilly Lace" and "White Lightning", the latter of which became George Jones' first number-one hit in 1959. Richardson was killed in a plane crash in Clear Lake, Iowa in 1959, along with fellow musicians Buddy Holly and Ritchie Valens, and the pilot Roger Peterson.

Richardson, who played guitar, began his musical career as a songwriter. George Jones later recorded Richardson's "White Lightning", which became Jones' first No. 1 country hit in 1959. Richardson also wrote "Running Bear" for Johnny Preston, his friend from Port Arthur, Texas. The inspiration for the song came from Richardson's childhood memory of the Sabine River, where he heard stories about Indian tribes. Richardson sang background on "Running Bear", but the recording was not released until August 1959, six months after his death. The song became a No. 1 hit for three weeks in January 1960.

The man who launched Richardson as a recording artist was Harold "Pappy" Daily from Houston. Daily was promotion director for Mercury and Starday Records and signed Richardson to Mercury. Richardson's first single, "Beggar to a King", had a country flavor, but failed to gain any chart action. He soon cut "Chantilly Lace" as "The Big Bopper" for Pappy Daily's D label. Mercury bought the recording and released it at the end of June, 1958. It slowly began picking up airplay through July and August, and reached No. 6 on the pop charts spending 22 weeks in the national Top 40. In "Chantilly Lace", Richardson pretends to have a flirting phone conversation with his girlfriend; the record was comical in nature, with The Big Bopper presenting an exaggerated, but good-natured caricature of a ladies' man.

In November 1958 he scored a second hit, a raucous novelty tune entitled "The Big Bopper's Wedding", in which Richardson pretends to be getting cold feet at the altar. Both "Chantilly Lace" and "Big Bopper's Wedding" were receiving top 40 radio airplay through January 1959. 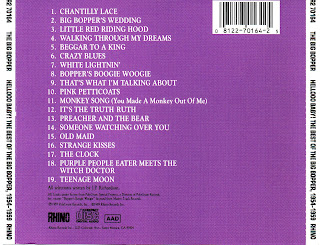 The Best of the Big Bopper